Deep learning has proven a stunning success for countless problems of interest, but this success belies the fact that, at a fundamental level, we do not understand why it works so well. Many empirical phenomena, well-known to deep learning practitioners, remain mysteries to theoreticians. Perhaps the greatest of these mysteries has been the question of generalization: why do the functions learned by neural networks generalize so well to unseen data? From the perspective of classical ML, neural nets’ high performance is a surprise given that they are so overparameterized that they could easily represent countless poorly-generalizing functions.

Diagram of MURAL, our method for learning uncertainty-aware rewards for RL. After the user provides a few examples of desired outcomes, MURAL automatically infers a reward function that takes into account these examples and the agent’s uncertainty for each state.

Although reinforcement learning has shown success in domains such as robotics, chip placement and playing video games, it is usually intractable in its most general form. In particular, deciding when and how to visit new states in the hopes of learning more about the environment can be challenging, especially when the reward signal is uninformative. These questions of reward specification and exploration are closely connected — the more directed and “well shaped” a reward function is, the easier the problem of exploration becomes. The answer to the question of how to explore most effectively is likely to be closely informed by the particular choice of how we specify rewards.

For unstructured problem settings such as robotic manipulation and navigation — areas where RL holds substantial promise for enabling better real-world intelligent agents — reward specification is often the key factor preventing us from tackling more difficult tasks. The challenge of effective reward specification is two-fold: we require reward functions that can be specified in the real world without significantly instrumenting the environment, but also effectively guide the agent to solve difficult exploration problems. In our recent work, we address this challenge by designing a reward specification technique that naturally incentivizes exploration and enables agents to explore environments in a directed way.

Updates and Lessons from AI Forecasting

Earlier this year, my research group commissioned 6 questions for professional forecasters to predict about AI. Broadly speaking, 2 were on geopolitical aspects of AI and 4 were on future capabilities:

Forecasters output a probability distribution over outcomes for 2022, 2023, 2024, and 2025. They have financial incentives to produce accurate forecasts; the rewards total \$5k per question (\$30k total) and payoffs are (close to) a proper scoring rule, meaning forecasters are rewarded for outputting calibrated probabilities.

Fig. 1: Given the original image $\mathbf{x}$, we would like to generate a compressed image $\hat{\mathbf{x}}$ such that the user's action $\mathbf{a}$ upon seeing the compressed image is similar to what it would have been had the user seen the original image instead. In a 2D top-down car racing video game with an extremely high compression rate (50%), our compression model learns to preserve bends and discard the road farther ahead.

Imagine remotely operating a Mars rover from a desk on Earth. The low-bandwidth network connection can make it challenging for the teleoperation system to provide the user with high-dimensional observations like images. One approach to this problem is to use data compression to minimize the number of bits that need to be communicated over the network: for example, the rover can compress the pictures it takes on Mars before sending them to the human operator on Earth. Standard lossy image compression algorithms would attempt to preserve the image's appearance. However, at low bitrates, this approach can waste precious bits on information that the user does not actually need in order to perform their current task. For example, when deciding where to steer and how much to accelerate, the user probably only pays attention to a small subset of visual features, such as obstacles and landmarks. Our insight is that we should focus on preserving those features that affect user behavior, instead of features that only affect visual appearance (e.g., the color of the sky). In this post, we outline a pragmatic compression algorithm called PICO that achieves lower bitrates by intentionally allowing reconstructed images to deviate drastically from the visual appearance of their originals, and instead optimizing reconstructions for the downstream tasks that the user wants to perform with them (see Fig. 1).


Along with researchers from Google Brain and OpenAI, we are releasing a paper on Unsolved Problems in ML Safety. Due to emerging safety challenges in ML, such as those introduced by recent large-scale models, we provide a new roadmap for ML Safety and refine the technical problems that the field needs to address. As a preview of the paper, in this post we consider a subset of the paper’s directions, namely withstanding hazards (“Robustness”), identifying hazards (“Monitoring”), and steering ML systems (“Alignment”). 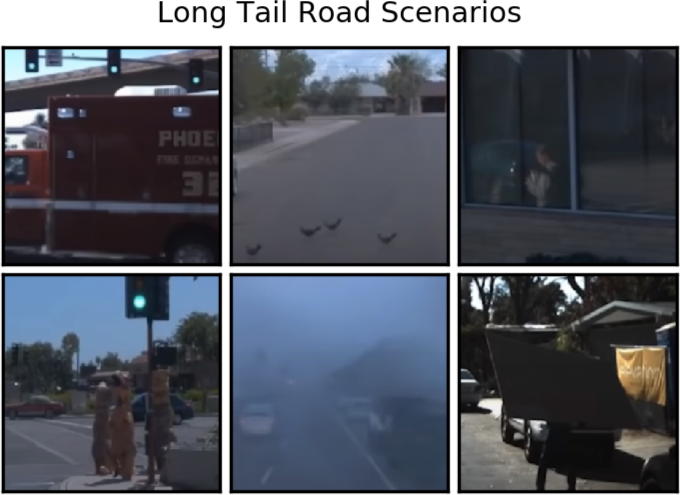 What Can I Do Here? Learning New Skills by Imagining Visual Affordances


How do humans become so skillful? Well, initially we are not, but from infancy, we discover and practice increasingly complex skills through self-supervised play. But this play is not random - the child development literature suggests that infants use their prior experience to conduct directed exploration of affordances like movability, suckability, graspability, and digestibility through interaction and sensory feedback. This type of affordance directed exploration allows infants to learn both what can be done in a given environment and how to do it. Can we instantiate an analogous strategy in a robotic learning system?

On the left we see videos from a prior dataset collected with a robot accomplishing various tasks such as drawer opening and closing, as well as grasping and relocating objects. On the right we have a lid that the robot has never seen before. The robot has been granted a short period of time to practice with the new object, after which it will be given a goal image and tasked with making the scene match this image. How can the robot rapidly learn to manipulate the environment and grasp this lid without any external supervision?

We consider a problem: Can a machine learn from a few labeled pixels to predict every pixel in a new image? This task is extremely challenging (see Fig. 1) as a single body part could contain visually distinctive areas (e.g. head consists of eyes, noses and mouths); different body parts might look similar and undistinguishable (e.g., upper arms v.s. lower arms). It could be even more difficult if we do not provide any precise location but only the occurrence of body parts in the image. This problem is dubbed weakly-supervised segmentation, where the goal is to classify every pixel into semantic categories using only partial / weak supervision. There are many forms of weak annotations which are cheap but not perfect, e.g. image-level tags, bounding boxes, points and scribbles.

The Surprising Effectiveness of PPO in Cooperative Multi-Agent Games


Recent years have demonstrated the potential of deep multi-agent reinforcement learning (MARL) to train groups of AI agents that can collaborate to solve complex tasks - for instance, AlphaStar achieved professional-level performance in the Starcraft II video game, and OpenAI Five defeated the world champion in Dota2. These successes, however, were powered by huge swaths of computational resources; tens of thousands of CPUs, hundreds of GPUs, and even TPUs were used to collect and train on a large volume of data. This has motivated the academic MARL community to develop MARL methods which train more efficiently.

In this post, we outline our recent publication in which we re-examine many of these assumptions about on-policy algorithms. In particular, we analyze the performance of PPO, a popular single-agent on-policy RL algorithm, and demonstrate that with several simple modifications, PPO achieves strong performance in 3 popular MARL benchmarks while exhibiting a similar sample efficiency to popular off-policy algorithms in the majority of scenarios. We study the impact of these modifications through ablation studies and suggest concrete implementation and tuning practices which are critical for strong performance. We refer to PPO with these modifications as Multi-Agent PPO (MAPPO).

BASALT: A Benchmark for
Learning from Human Feedback


TL;DR: We are launching a NeurIPS competition and benchmark called BASALT: a set of Minecraft environments and a human evaluation protocol that we hope will stimulate research and investigation into solving tasks with no pre-specified reward function, where the goal of an agent must be communicated through demonstrations, preferences, or some other form of human feedback. Sign up to participate in the competition!